Ten Trick Ponies is an over-the-top improv duo featuring Iowa-born siblings Marty and Jackie Wessels. Their set is stuffed to the brim with big characters wielding bigger emotions, all based on an audience suggestion of a memorable sibling squabble. Saddle up for this display of sibling rivalry and Midwestern stereotypes!

Ten Trick Ponies will perform on Saturday, August 17 at the HCC Studio Theatre in the 8:45 p.m. block. 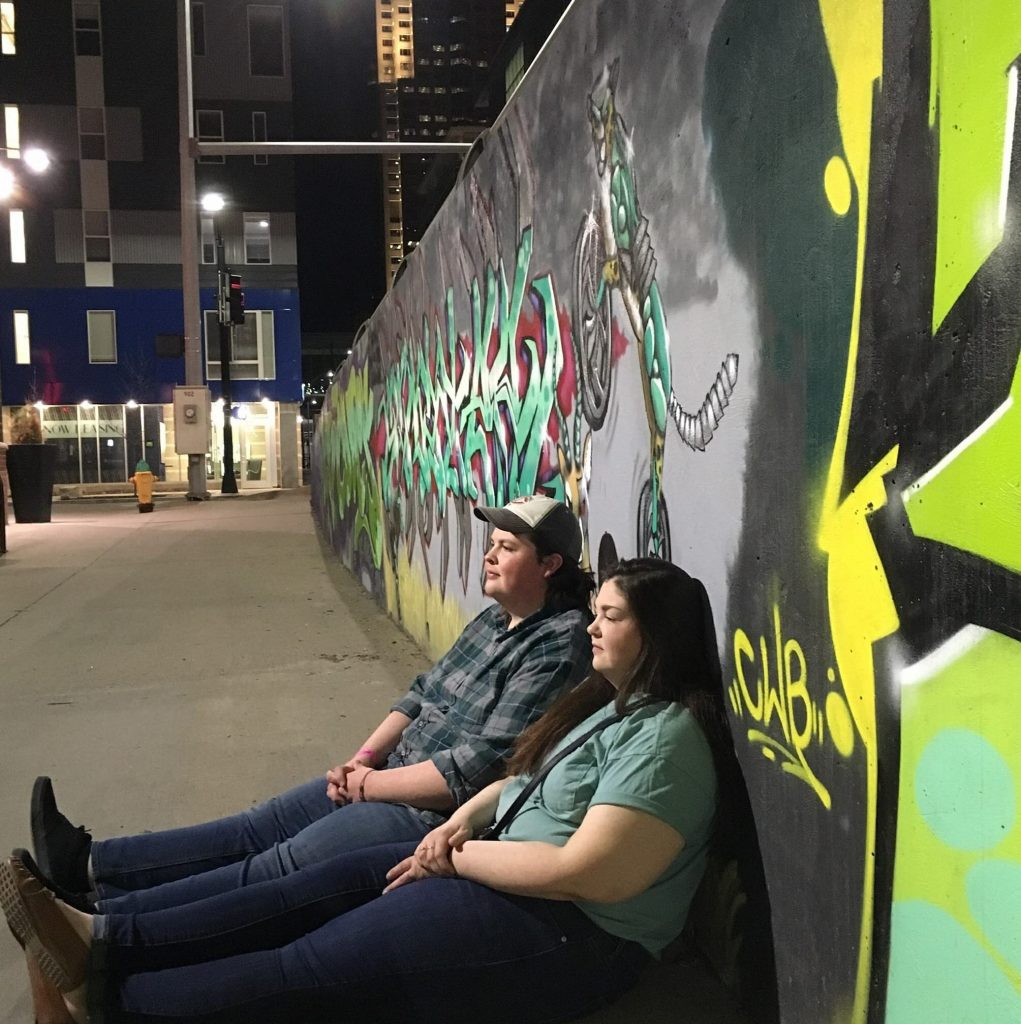 Ten Trick Ponies is an improv duo consisting of sibling power duo Marty and Jackie Wessels. Growing up together on the East coast of Iowa, the two have had a lifetime of “scenes” together. After improvising together while students at the University of Northern Iowa adult life and career goals separated the pair. Marty now lives in Minneapolis, Jackie in Des Moines. However, it takes a lot more than 244 miles on I-35 to keep this show apart. The Ten Trick Ponies are back in the saddle, and here for a good time.

We’re so excited for your set! Your submission tape was one of the most purely enjoyable tapes we watched this year. Tell us about your format, and your strategies for finding and heightening the funniest moments in all of the scenes that you play.

Marty Wessels: FLATTERED! As far as the form goes it really isn’t anything flashy or complicated, we’re just doing some scenes and having a good time as pals! A major goal of ours with every set is to be patient with our words and to really fill that between space with physicality. I think our greatest strength is our timing, and patient scenes are a huge part of that.

Jackie Wessels: We’re practical people who just want to have a good time. We have a good respect and understanding for each other, our audience, and improv.

You’re both clearly very comfortable playing big, emotive characters on stage. What do you find fun about this performance style? And do you have any tips for playing big characters that also have depth?

JW: Character work is just straight-up fun. The part that really sells a big character is the small details. Everyone in the world has “isms”. Small mannerisms that are unique to the individual that they probably don’t even realize they do. Heightening these little things really drives a character home.

MW: As human beings we always remember the over the top people we encounter. We remember the insanely happy barista and can’t forget the aggressively mad old man at the bar. What we do tend to forget is the personality types that fall in the middle. We hope that when we play these larger-than-life characters that it sparks some sort of a strong memory with folks in the audience. The biggest tip I would have for anyone looking to play bigger characters is creating a backstory. The person on the top of the mountain wasn’t just put there! It is so important to pepper in how on earth the person in front of you came to be.

You said something really interesting in your submission: that your set was “an improvised show with no frills… nothing fancy or shiny… just plain old good improv.” What attracts you to this no-frills ethos? Is it liberating in a way?

JW: The Wessels weren’t raised on frills. We were brought up on vanilla ice cream and black coffee. Two seemingly simple things that are surprisingly difficult to get right. Strip it away and bring it back to basics. If you can’t make a good, quality, simple cup of coffee, what good are ya?

MW: Absolutely! We really grew up with a great sense of appreciation for simple pleasures in life and that really carries over into the way we play. In the Twin Cities narrative improv is a really big part of our community, and I love that, but I don’t always get to just play with no perimeters or goals. In this duo I am able to get back to basics and reconnect with improv at its simplest form with my OG scene partner.

The two of you are siblings! Take us back to the moment when you first decided to get on stage together and improvise as a duo. What prompted that decision, and how has your show changed since you first got started?

JW:We are! We are 18 months apart and we grew up close. We were always involved in the same activities and had similar interests, so our paths never strayed too far from each other. We both ended up at the University of Northern Iowa as members of the campus improv troupe, Some Assembly Required. This is where we really got the chance to figure each other out as improvisers and learn how to share the stage. After college, we went our separate ways. One to Minneapolis, Minnesota and the other to Des Moines, Iowa. We both continued to improvise within our communities but realized that we missed playing with each other. Our first ever show as an improvised duo was only a few months ago in Minneapolis. Actually, it was our submission video. We’ve done one show since in Des Moines, so needless to say we are excited for show number three in Tampa!

MW: I would say there were a few things that drove us to start this dynamite-distance-duo. 1) Some of our most cherished memories from college (and that’s saying a lot because we really did the college thing) came from doing improv together. We really wanted to find a way to get back to that. 2) We both really wanted to start traveling and performing at festivals but a lot of the projects that we work on in our respective cities are too big, too inconsistent, or too casual to take on the road. The group we played with in college traveled a lot and we both mutually missed that aspect. 3) We saw a posting for a small groups improv festival in Tampa and said, “Hey, our really good pal Jake lives in Tampa and it has been too long since we’ve seen him. We should start a duo, film a set, submit it, and then visit Jake.”  So… that’s what we did! HOWEVER, it did not dawn on us until later that two fall loving Midwesterners just agreed to go to Florida in August…

JW: Not a whole lot. Just some basic warmups and a sick playlist. Debrief, easy? Beer.

MW: We are really big on playlists. They are typically made up of trap bangers and old old country. It’s a real vibe. After the show we usually do a quick pat on the back and pin a debrief until later. We have to let it simmer down a little, so we don’t end up just arguing with each other. Other than that, we love to have a couple beers and mingle with the people who were kind enough to share their time and laughter with us.

Finally, you’ve both lived all over Iowa, which is one of our favorite states in America, in part because it’s home to some truly unique roadside attractions. We’ll tell you our favorites if you tell us yours! (We love places inside of other places: Trainland USA, which is an extensive model railroad staged in some guy’s extra barn in Colfax, and the Bob Feller Museum, which is just a room inside the Van Meter Town Hall.)

MW:We love to hear that because we love our home state of Iowa! In the category of weird roadside attractions, we recommend the world’s largest popcorn ball in Sac City, the frying pan in Brandon, the Strawberry in Strawberry Point, the Big Bull in Ackley, and above all else the world’s largest truck stop — Walcott I-80 Truck Stop. Everyone assumes Iowa is all farms, and you’re not totally wrong, but there are some seriously cool sights and fun things to do. Here is Marty and Jackie’s ultimate Iowa Guide (abbreviated version):

• Des Moines Farmers Market (It’s really big)
• Iowa State Capitol (It’s got G-O-L-D GOLD!) (JW: He means that the exterior dome is made of gold.)
• Dive bars (JW: Cash only and you can snag a Bush latte for under $2)
• Dubuque’s Mines of Spain recreation area (America’s best view of the Mississippi)
• THE GD FIELD OF DREAMS (This is the area where we are from and I cry every time I watch it) (JW: Part of it was actually filmed in our middle school, and our dad swears that he met Kevin Costner.)