The family reunion is winding down and it’s almost time to go home, but not before Grandpa tells us a story from his past. He’s a bit forgetful, though, so be ready to jog his memory!

Storytime with Grandpa will perform on Thursday, August 15 at the HCC Studio Theatre in the 8:20 p.m. block. 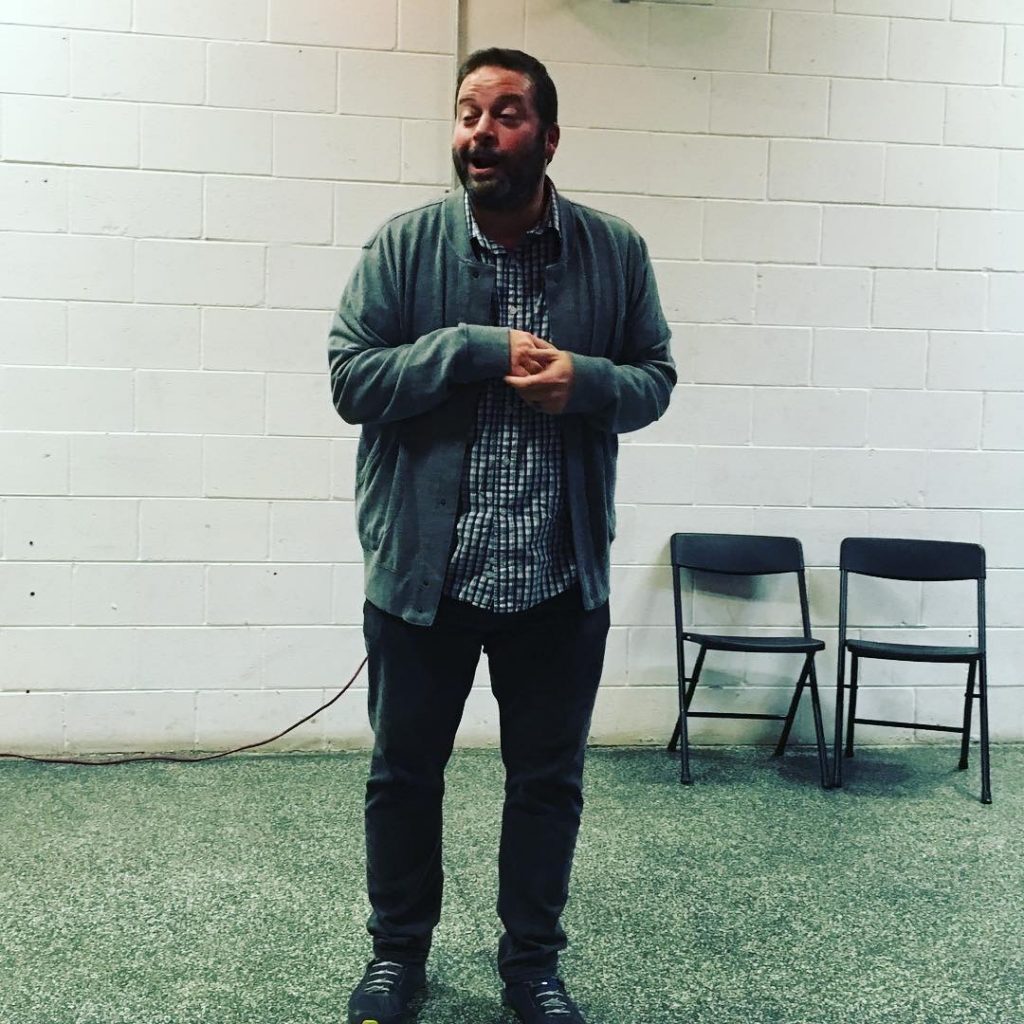 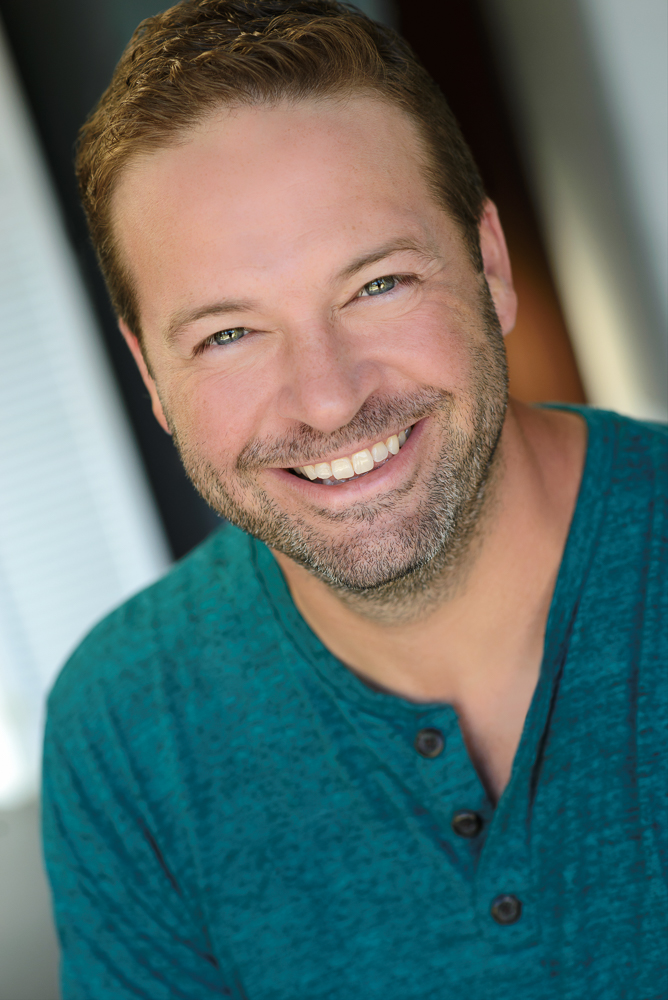 Tell us about the genesis of “Storytime with Grandpa.” What first made you want to start performing solo improv, and how did you figure out that this was the show you wanted to do?

I took a really great workshop at Coal Space last year that involved choosing a character and staying in it for the duration of the time there. For whatever reason, I chose to live inside an 85-year-old widower. My background is in theatre, so this kind of exercise wasn’t foreign to me. But it’s rare to have the opportunity to spend so much time existing in such a different character in an improvised setting. I felt pretty comfortable in his skin, possibly due in large part to my own lifelong affinity for soup. Months later I found out a then-defunct duo I was a part of was accepted into the Palm Beach Improv Festival. Instead of declining the invite, I thought of ways I could do a solo set. Solo improv was still something that mystified me. But I felt as though the universe was offering me an opportunity to dive headfirst at something that scared me.

I knew I wanted to tell stories and I knew I wanted there to be an emotionally grounded component to the show. That’s always been something I’ve felt very comfortable doing. Then I remembered that old man character I took on in that workshop and, honestly, things just rolled downhill from there. The concept flowed easily from those elements.

Has the way you approach the Grandpa character changed at all over the time you’ve been performing the show? How does the Grandpa we’ll see in August differ from the Grandpa you started out with, if at all?

Externally, I’m not sure there’s much of a difference. I settled into the Grandpa physicality quickly and, out of a desire to keep him different from whatever other characters I play during any given set, it’s stayed pretty consistent. But with each story Grandpa tells about his earlier years I gain a deeper understanding of who he is as a person. So information that is revealed in one show might change the way he reacts to something in a later show. I also try to quickly figure out when in his life this particular story I’m about to tell takes place. It doesn’t always work out that I’m right, it’s not much more than a guess when the story begins.

Audience participation is a huge part of your show. What do you like about involving the audience so much? Are there particularly memorable audience interactions you’ve had that stick out in your mind?

Oh hell yes it is, haha. When I was first conceptualizing the show I knew I wanted to involve the audience throughout it. With it just being me up there, I wanted to work in a way to be able to bounce things off someone if I needed to. The way the concept developed also made it incredibly easy and logical. Grandpa’s talking to his family. Of course he’s going to interact with them. Having them be the ones to offer story and character elements was a no-brainer.

Improv, in general, is inherently interactive to varying degrees. What I looked for was a way to weave the audience, and their involvement, into the overall story concept. I’m not an improviser performing for an audience, I’m a grandfather talking to his family. Within that simple structure can exist all different kinds of interactions. Grandpa can play favorites. He can sass family members who get out of line. He can play to whatever the vibe is in the room because he’s known these people their entire lives. He’s helped change the diaper of every single other person in the room. It allows me to exist in the moment, in character, and leaves room for any type of interaction to fit perfectly fine within the overarching concept of “We’re all here listening to Grandpa tell us a story.”

I think my favorite bit of audience interaction happened the first time I performed the show. I have a tendency to get a li’l sweaty on stage and so Grandpa commented on how hot it was in the room (it wasn’t). This nice woman handed me her handkerchief, at which point Grandpa showed her he also carried one. He also quickly pocketed hers. Later on, during a certain triumphant point in the story, this same woman let out a “Yes!” which really took me by surprise. So Grandpa handed her handkerchief back to her in solidarity. It was silly and sweet.

Tell us about “Let’s Get Real,” the “comedy commune” you founded last year. What inspired you to launch it? What do you like about being a producer as well as a performer?

Let’s Get Real is an idea borne similarly to how Storytime came to be. I thought about what I wanted to do as an improviser. Of the great many number of types of improv that I love, which ones are the ones that speak to me most. And I kept landing on emotionally grounded, truthful scenes. Narrative. Comedic, yes, but unafraid to go in a dramatic direction if that’s what was called for (I call it Dramedic Improv). So I searched for ways to make it happen. Music in improv is something I hold in the highest regard. I’m a firm believer that unaccompanied improv has a hard ceiling. As great as a scene is, having music playing under it automatically makes it better. I asked Ryan Goodwin to be my music director and he agreed, which has been invaluable to the quality of the work. He’s both a great musician and a great improv accompanist and, yes, they’re two different skills. We found a home in Theater West End in Sanford, an absolutely gorgeous space, and got right to work.

For the first six months, it was just Ryan and myself, but I’ve recently expanded the LGR family and have created our first ensemble cast. While there are a few members of the Orlando improv community in the cast, the majority come primarily from theatre/film acting backgrounds. This keeps in line with one of the aspects I wanted LGR to focus on from the beginning, which was to try to incorporate performers from the area who definitely could improvise but didn’t really get many opportunities to. It also fills the cast with performers who come into it more adept at playing emotionally truthful moments on stage. The reason I’m calling it a “comedy commune” is because we’re going to begin adding written sketches, filmed content, short films into the repertoire. There are really big plans cooking for LGR!

Being a producer is exhilarating and exhausting. But I feel as though I entered into this phase of my career with a good mindset; I knew it would be difficult, I knew there were going to be fires I’d have to put out that I couldn’t even possibly anticipate, and I knew that the sooner I accepted that this was simply a reality the sooner I’d become better equipped to handle them. And it worked. I feel as though I’ve been able to face the quiet hiccups without treating them like loud burps.

But it also allows me to do anything I want, format-wise. LGR has a base format: three open slots for teams to perform, then a final long-form narrative scene, with normally a special guest who is able to step into any scene to provide support. But I can, and have, plugged in different show ideas. In May I debuted KaraJokeY; a karaoke/improv hybrid competition show. July and August’s shows are what I’m calling our Team Swap shows; we’ve invited troupes from around the state to come perform in those shows and then myself and members of the ensemble will travel to their venues and perform there. It’s a way to try and expand the community feel here in Florida. There’s a lot of improv happening in the Orlando area, but sometimes it can feel a bit insulated. There’s a bunch of great stuff really close by. Being the creator and producer is giving me free rein to try any crazy idea I feel could make for a fun show, and that’s something I’ll happily work harder to be able to do.

Do you have any pre-show rituals? How do you like to get ready for a show?

I love to spend time in the space, preferably by myself, and just sit for a while. Close my eyes, do some focused breathing, visualization, check-in with my body and mindset. I suffer from anxiety and I have a small panic attack every day between 4-4:30pm if I have a show that night. I’m not joking. It’s like clockwork. So the quiet, reflective time is very useful for me. Other than that, if I’m performing with others, I go along with whatever warmup they choose. The only thing I do that’s mine right before a show is I give everyone a small fist bump. I don’t know why. I’ve been doing it for years. It just became the thing I needed to do to have that one last quick connection with each person before we go out on stage. I do it for improv, scripted theatre, film, etc.

During the day, if I’m able to, I prefer to have some kind of physical activity even if it’s just a walk around the neighborhood. And I try to eat cleanly that day also. If I’m feeling good physically that day it’s one less thing I have on my mind come showtime.

Finally: Who’s your favorite fictional grandfather, and why?

Wow, this is a tough one. I thought long and hard, but no matter what I always kept coming back to Grandpa Abe Simpson. He’s just a great, great, funny character and has also had his share of truly heartwarming stories told on the show. “Death haunts me at every turn.”